In Memory of
Margaret
Kaufman
1924 - 2016
Click above to light a memorial candle.
Memorial Candle Tribute From
Fawcett Funeral Homes Limited
"We are honored to provide this Book of Memories to the family."
View full message >>>
Send Flowers
Menu

In the event that there is an error
in the information presented,
please contact the funeral
home by clicking here.

Peggy to all, was born a Forbes, married in 1948 to Colin Andrew Wilson (1926 - 1998), having two children Pamela and Ross. After divorcing Colin she happily married William “Bill” Hutton Kaufman (1920 - 2005) in 1968 and enjoyed a very happy married life together..
Peggy passed away in Collingwood comfortably in the morning of October 22nd 2016.
Vivacious and fun-loving Peggy made friends easily and was by everyone’s account loved. She Graduated in Nursing from Sick Children’s Hospital and continued a lifelong dedication to the welfare of sick children and to the institution of Sick Kids.
During her early years she was a “crack shot” with firearms, beating a Canadian Olympic Champion at the family camp near Sudbury. She loved the outdoor adventures throughout her life, especially in our northern areas and in particular, Georgian Bay. She learned to ski with Bill and spent many delightful years of adventure with him in the Rockies.
The most delightful story about Peggy is when in 1988 Bill and she were invited to the North Pole just preceding Pole Adventurers, who were promoting “Sorel” boots for polar use, and their own polar excursion. Peggy was adamant that she be allowed to place a symbolic figure as a gesture to the northern occupant so there would no longer be doubt as to where he resided or falsehoods expressed about his presence there. Unfortunately, weather prevented the landing and her mission was uncompleted; disappointing yes, and yet he always, in fact, resides there.
Peggy regretted outliving her sister Bet and was devastated by the loss of her daughter Pamela in 2011. She is survived by her loving son Ross and beloved daughter-in-law Hajra. Visitation will be held on Thursday October 27, 2016 from 6-8 p.m. at Fawcett Funeral Home, 82 Pine St. Collingwood and a celebration of life service will be held at a later date. In lieu of flowers, please send a donation to SickKids in Toronto. Thank you, most sincerely, Ross Wilson.

To send flowers to the family or plant a tree in memory of Margaret Kaufman , please visit our Heartfelt Sympathies Store.

Serving Collingwood, Creemore, and surrounding areas for over 155 years. 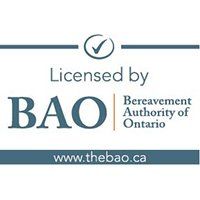 Consumer Information Guide: A Guide to Death Care in Ontario